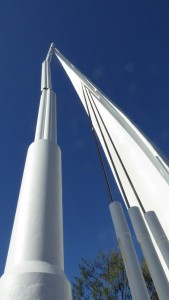 Home of the famous Singing Ship, the Emu Park land area was first discovered by Captain James Cook in 1770. It overlooks the islands of Keppel Bay, including the Great Keppel Island. Emu Park is a popular tourist spot, and has won several tourism awards, and features fishing, surfing, boating, and unspoiled beaches.

Emu Park’s European history dates to the 1860s when the Jardine family established a cattle grazing property south of the current town, at Zilzie, an anagram of Lizzie Jardine.[4]

Emu Park township was established in the 1870s when several Rockhampton families built seaside holiday houses on the hills overlooking the two beaches that are a feature of the town – Fisherman’s Beach and Pine Beach. Emu Park was connected to Rockhampton by train in 1888 and became a popular, but fairly select, seaside resort from that time on. A branch to Yeppoon, further to the north was opened in 1910.[5]

By the 1920s the town boasted two large hotels, a cinema, court house, state primary school, public library, shops and many guest houses for visitors. A small pier was opened by Mrs Bruce, wife of the Prime Minister, Stanley Bruce, in 1926 and Bell Park, a shady park on the shores of Fisherman’s Beach was established in the 1930s.[7]

The railway link from Rockhampton closed in the 1960s due to declining passenger numbers and the line to Yeppoon no longer exists.[5]