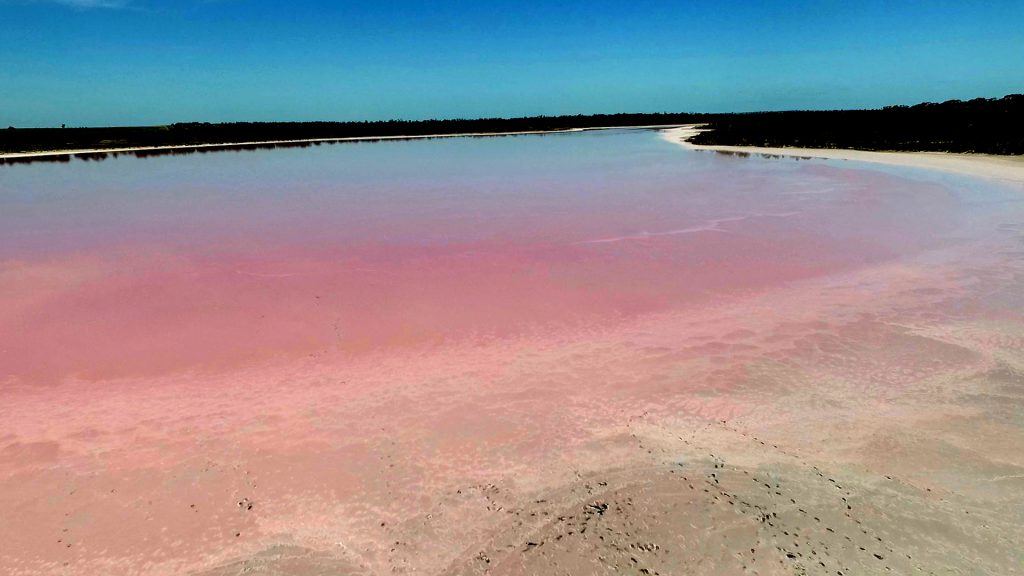 The park is one of the few remaining semi-arid regions in the world where the environment is relatively untouched. With its wide open landscapes, breathtaking sunsets and starry nights, its vastness and isolation, the Pink Lakes will take more than a day to explore.

Why are the lakes pink?

The Pink Lakes are so named because of their colour during late summer. The lakes’ waters are actually crystal clear and the beds of the four lakes are made up of solid salt. A red pigment called carotene is secreted from the algae (Dunaliella salina) that grows in the water which gives the lakes their pink hue. The colour is best seen early or late in the day or when it is cloudy. The lakes evaporate over summer leaving concentrated salt crusts over black mud.

Murray-Sunset National Park is in northwest Victoria, between Ouyen and Mildura and the South Australian border. It is about 550km from Melbourne and 400km from Adelaide. Access to the park from Melbourne is via the Calder Highway, and from South Australia via the Sturt Highway. The Pink Lakes are 60kms west of Ouyen along the Mallee Highway. Turn onto an all-weather gravel road for 13kms to the main camping areas at Lake Crosbie. Access further north into the park is for four wheel drive only. Access is also possible by two wheel drive vehicles along a gravel road from Linga. For those with limited time, a drive around the Pioneer Drive (Pink Lakes) is recommended. Otherwise take a four wheel drive trip to the Mount Crozier Lookout or old Mopoke Hut outstation. Things to see and do

This is a great park for four wheel drive touring, bushwalking and camping. There are excellent walking tracks in the Pink Lakes area, along with a campground. Keep an eye out for local kangaroos, wallabies, emus and echidnas as you wander. Bird watchers will love the opportunities on offer, with Red-Rumped Parrots, Mallee Ringnecks, Spotted Pardalotes and White-Fronted Chats, all calling the region home.