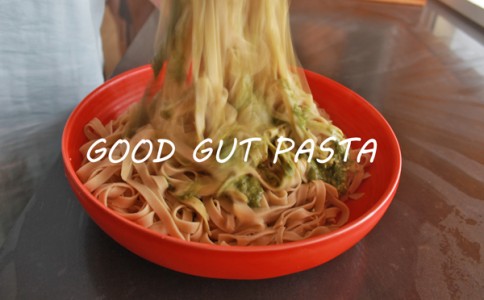 This is a fantastic local group that are doing really good things.

The Good Gut Group is a very small company that is determined to offer better quality pasta to the 15% of adults who suffer from Irritable Bowel Syndrome (IBS) and also to those who bloat up when they eat too much wheat. We are committed to making this happen because cutting down on wheat can improve the quality of life of people with IBS by a million percent, well…… a lot!

Most people whose tummies blow up like a balloon when they eat wheat think it is the gluten causing the symptoms, when in fact it is the FODMAPs (undigested carbohydrate part) that are to blame. With so much hype in the media about gluten, and so many food products now claiming to be ‘gluten free’, the confusion is understandable.

The only pasta that is currently available on the market for people who are following a low FODMAP diet to manage IBS (1 in 7 adults) or bloat up when they eat too much wheat (the rest of us) is gluten free pasta. Two major problems here – firstly not all gluten free pasta is low in FODMAPs, because it might contain other fermentable carbohydrates or fibre additives. The second and more pressing issue is that gluten free pasta does not behave like pasta. It doesn’t stretch or bend or absorb sauces the way pasta should, because it doesn’t contain gluten. Ask any Coeliac if they would choose gluten free pasta if they had a choice, and I bet the answer would be a resounding NO. We think that it is great that those with Coeliac disease have a pasta alternative, because they have no choice but to exclude gluten, however for those people with IBS or who bloat when they eat too much wheat there is now a choice (with your help) – Good Gut Pasta.

Our pasta is made from low FODMAP grain flours. We have kept the gluten at similar levels to wheat products while keeping the FODMAP content very low, so our pasta feels and tastes like wheat pasta (a billion times better than gluten free) but without the resulting pain and bloating. In our next post the Good Gut Group co-founder, Geoff Whitehouse will  share his side of the Good Gut Pasta story.

The Good Gut Pasta crowdfunding campaign, hosted by Pozible will commence in May 2016. Details to come soon.

To see their blog and more discussion go to Goodgutgroup.com