Stephen Bromhead is a strong local advocate and rugby fanatic. He has lived and worked in the Myall Lakes area throughout his career.

After starting out working as a nurse, Stephen turned to law & order and worked with the NSW Police Force for twelve years. During this time he spent ten years in Taree. Stephen then studied to become a solicitor and barrister.

In 1992 Stephen joined Walker Smith Solicitors and became a partner in 1993. In 2007 Stephen started the Forster-based Bromhead Legal.

As a former Greater Taree City Councillor, Chairman of the Tourism Board and President of the Forster Chamber of Commerce, Stephen’s desire to help the community has not been impeded by his busy careers. He believes his first hand experience working in hospitals, on the front line, representing the people of Myall Lakes in court and at a local government level have given him a firm grasp on the real issues that the people of the Myall Lakes electorate face each day.

Stephen previously owned a property outside Taree and bred beef cattle, but now he and his wife Sue have moved to Forster. Together they have seven adult children all pursuing their own careers.

Judith Fox is an accredited Dietitian with 30 years of experience in positions ranging from Chief Dietitian at Royal Alexander hospital for Children, other major Public hospitals and over 15 years in Private practice in Forster/ Tuncurry, Newcastle, Redfern and Taree.  Judy is the mother of 4 grown up children and is a passionate cook. Teaching people to modify their diets in manageable, affordable and enjoyable ways gives long lasting dietary change.  Judy believes that in Chronic Disease the modification of diet is most often the single most important change that a patient can make. The Obesity epidemic is real and Judy offers the practitioner and the patient an opportunity to take real action. 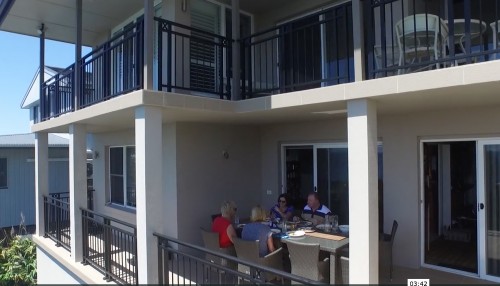 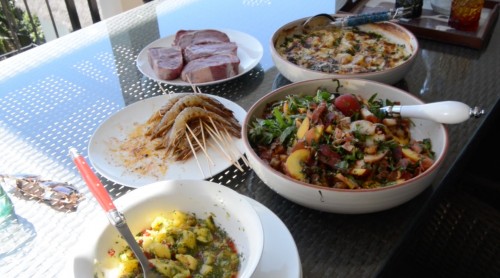 In a bowl add 2 Tablespoons of extra virgin olive oil and a good teaspoon of Cajun spice.

Add prawns and marinate while you make the Mango Salsa.

Chop up 1 large mango into bite size pieces.  Grate the rind of 1 lemon and chop a good handful of coriander. Chop one chilli and add the juice of a fresh lime.

Combine in a bowl and serve with cooked prawns.

Yellow and white peaches sliced in a vinaigrette dressing. Vinaigrette is made by mixing an oil with something acidic such as vinegar or lemon juice. The mixture can be enhanced with salt, herbs and/or spices. Add prosciutto and hazelnut dressing